A trio of upstart homebuilders got a bank to take a big chance on them. Now they’re eyeing a leap into secondary revenue streams. 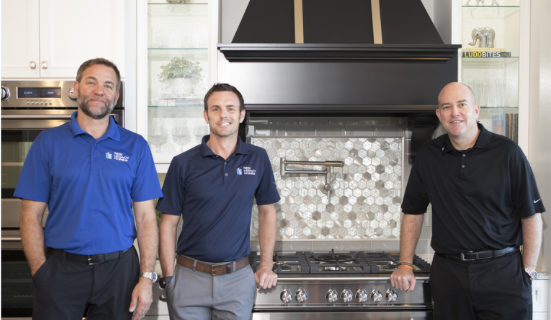 Florida’s booming population means happy days are here again for homebuilders. But a shortage of skilled trade labor combined with the hegemony of big national builders with deep pockets means the industry isn’t the easiest to break into, despite high demand.

Unless, that is, you find a niche, a gap in the market that’s been overlooked — and attack it with abandon.

That’s exactly what New Legacy Homes has done. The Tampa homebuilder was founded just three years ago. But it has already built 18 high-end, spacious custom homes — mostly in South Tampa, and many on spec — with at least 10 more on the way.

“I discovered that there’s a hell of an opportunity in South Tampa,” says co-founder and co-owner Steve Wiltse, who worked for luxury homebuilder WCI Communities, now part of Lennar, and Beazer Homes for several years. “I saw the price points, the quality and spec level, and I saw a huge void.”

Wiltse and co-founders Rob June and Brandon Roberts wanted to build homes with construction that doesn’t “cut corners” and utilizes materials, such as Icynene foam core insulation and variable-speed air conditioning that are appropriate for the region. They also insist on bringing houses to market laden with the latest innovations in home automation, like video doorbells and Wi-Fi enabled thermostats.

“We decided that we’re doing foam core standard; we’re not deviating,” Wiltse says. “If somebody comes to us and says, ‘Hey, we want you to build us a house but we don’t want to use foam insulation. ‘Well, we’re not building your house.”

Use of advanced, energy-efficient materials and home automation technology doesn’t cut into New Legacy Homes’ profit margin as much as you’d think. Wiltse says the company netted about 10% on its first 10 homes — with an average purchase price of $875,000 — though that percentage could have been higher. “All of our homes are built to be Energy Star Certified.”

“We decided to make less money but build better homes, and the bank was OK with that,” says Wiltse, referring to American Momentum Bank, which gave New Legacy Homes a $3.6 million builder line of credit. “They see it as a pretty good investment, because we’re turning [homes] over every six months.”

Wiltse says the co-founders, all veterans of big national builders, were at “ground zero” when the housing crisis hit in the mid-2000s. They don’t want to repeat that experience, so they used about $200,000 of their AMB loan to diversify. That includes opening a design studio and real estate agency on West Kennedy Boulevard in Tampa.

The agency, Wiltse says, will not only open up an additional revenue stream but also ensure the company can control the message around its homes and homebuilding processes. It could also serve as an entry into the rental market. Wiltse admits it’s a risk to jump into a new line of business so quickly, but New Legacy sees the potential competitive advantages as too good to pass up.

“People are doing 90% of their research on whatever product they’re going to buy before they get there and buy it,” he says. “So we have a much different philosophy than anybody else. Our competition, they buy a lot and sit and wait for somebody to come along and buy it. They won’t spec [houses] into the ground. We have five or six right now, and because of that, people are doing their research on us.”

Aggressively building spec houses drives traffic to the company’s design center, where potential buyers can choose a predefined style of finishes and features. Appliances are another area where Wiltse and his team won’t compromise, given their partnership with Fisher & Paykel, a New Zealand-based manufacturer of ovens, ranges, refrigerators and dishwashers.

This article has been reposted from the Business Observer https://www.businessobserverfl.com/article/new-legacy-homes-tampa-homebuilding

Posted in News
← 3 House Size Tips: How Big of a House Do You Really Need?3 Things to Look for in Home Builders →