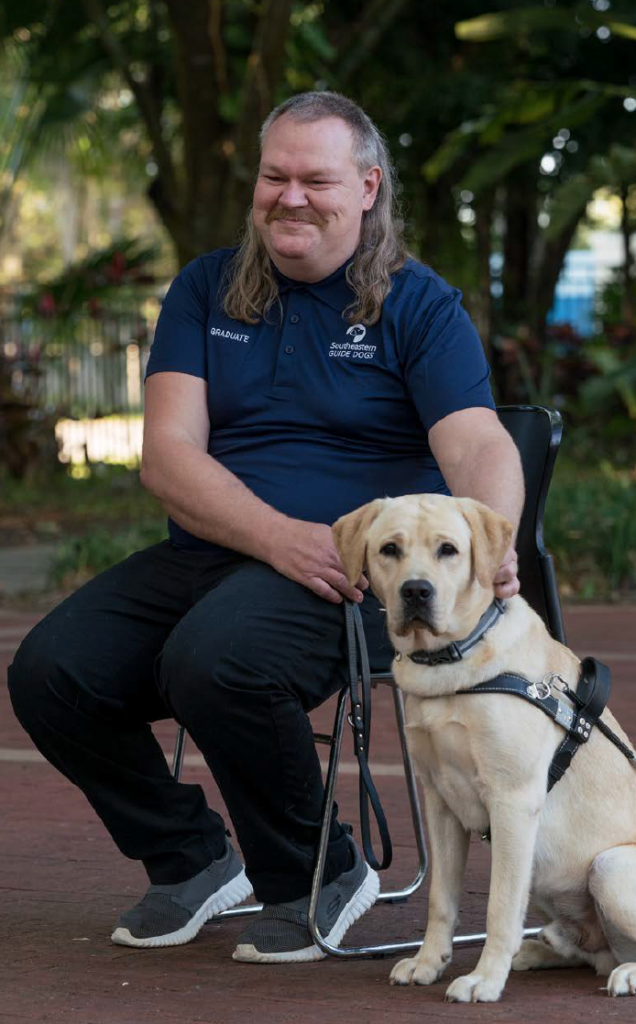 Eric Bentley can rebuild a car’s engine from start to finish, a remarkable job considering Eric is totally blind. He lost his vision from sympathetic uveitis, a rare inflammatory response in both eyes after trauma to one eye. At six, he tripped while playing tag and slammed his face into a truck bumper, damaging his eye.

Eric grew up around his uncle’s automotive shop, where he and his dad tinkered with cars. His dad was his best friend and taught him many things as they went everywhere together. When his dad moved farther away, Eric hung his phone around his neck, and—using FaceTime—his dad guided Eric’s daily walks around town. “The miles we put on those phones…” Eric says, remembering. “Walking…that was me and daddy time.” His mom and dad encouraged him to never say “can’t” and to keep a positive outlook.

This past October, Eric’s dad passed away. Nothing can replace him, but a big yellow Lab named Legacy will help fill a void of companionship and give Eric the ability to walk out the front door again. “I was ready for more freedom,” Eric says of his new guide dog. Legacy is a playful “goofball,” and Eric looks forward to taking him fishing, camping, and of course, having him by his side while he checks under the hood of a car.

Legacy is sponsored thanks to the generosity of New Legacy Homes, LLC. and named in honor of their company.

Posted in News
← 5 Reasons a Home Automation System Is Essential for Every Luxury HomeHow Do I Choose a Custom Home Builder? →